Yes, it will never reach the dizzying heights of a European Cup / Champions League win, nor has it even made a dent in that competition as of yet.

But, thanks to the management of Ange Postecoglou and the profile and characters of the players he has brought to the club in his short tenure, the relationship between the players and fans has arguably never been so strong.

And, crucially, the relationship between the players at Celtic appears to be incredibly strong also.

This has never been more evident than this week, in the wake of the team’s third Scottish Premiership win in a row at the start of the 2022/23 campaign.

The Hoops travelled to Rugby Park on a gorgeous Sunday afternoon at the weekend, and the performance was befitting of the glorious weather as they smashed five past Kilmarnock in an impressive win.

Many Celtic fans would have been forgiven for believing that the team may struggle to hit top gear against Killie.

Not due to their talent, of course, but the combination of Derek McInnes’ medieval tactics, the scorching sun, and the atrocious pitch.

A win always looked certain, but how comprehensive it was was a pleasant surprise.

Yes, there were no excuses prepared pre-match for a potentially less-than-impressive performance.

Instead, the players took it upon themselves to blow the plastic pitch myth out of the water with their attitude, determination and at times dazzling play.

Kyogo’s was a fine finish following the assist from Daizen Maeda, but the move was started thanks to a magnificent pass in between the lines from Greg Taylor, whose performances at the back end of last season into the new one have been hugely impressive.

Indeed, Jota was keen to point out Taylor’s contribution to the team after the win, telling Sky Sports:

“First of all, I think I should speak about Greg because he’s been unbelievable this season. He’s a top player, he’s delivering in every game and his standards in every game are just unbelievable. I don’t think he gets enough credit.”

The love-in would continue after the weekend, as Taylor would respond to Jota’s words in a Celtic fan Q&A over Twitter.

“I think you could see in the interview I was really touched by Jota’s kind words. For him to say that it did mean a lot. For your teammates to think highly of you there is no better feeling and no better praise.”

The bromance we never knew we needed!

🗣 “I think I should speak about Greg because he has been unbelievable this season, he’s a top player, I think he’s delivering every game”

Jota was full of praise for his team mate Greg Taylor, saying ‘he really deserves’ being named Player of the Match 💚 pic.twitter.com/lnD24TWZ0D

The interactions between Taylor and Jota over the last few days have summed up the atmosphere that currently inhibits Lennoxtown and Celtic Park.

The players, led by Ange who by now we all know is an all-round good bloke, have created an ambience of professionalism, respect and, it seems, friendship.

Look at any video content posted by Celtic, particularly interviews with more than one player at the same time, and you will see the camaraderie shine through the screen.

Another example of the positive atmosphere can be found from this past weekend, too.

Carl Starfelt, who has struggled with injuries at the start of the new term, scored his first goal for the club at the back post against Killie, smuggling the ball over the line after seeing his initial attempt saved.

The celebration from him was one of passion, but it was heart-warming to see his team-mates rush to the corner to congratulate him.

We even saw Ange breaking his usual cool exterior to send a lovely smile the way of the Swedish international.

Truth be told, there actually isn’t anyone dislikeable in this Celtic squad. Yes, you may not necessarily be a fan of a certain player’s talents, but they are undoubtedly “a good group of boys” in the dressing room at the moment.

In the recent past, we have seen unprofessionalism from the likes of Kris Commons, Leigh Griffiths and Boli Bolingoli, while even the desire of star players like Moussa Dembele and Odsonne Edouard to leave has caused some uncertainty in the dressing room.

The desire of players to move will naturally come again due to the talent we have in our squad at the moment, but until that happens, let’s all just hope that whoever wants to leave will be respectful to Ange and the fans.

The same kind of respect they are showing to each other at the moment.

Listen now to the latest episode of The Celtic Exchange Weekly 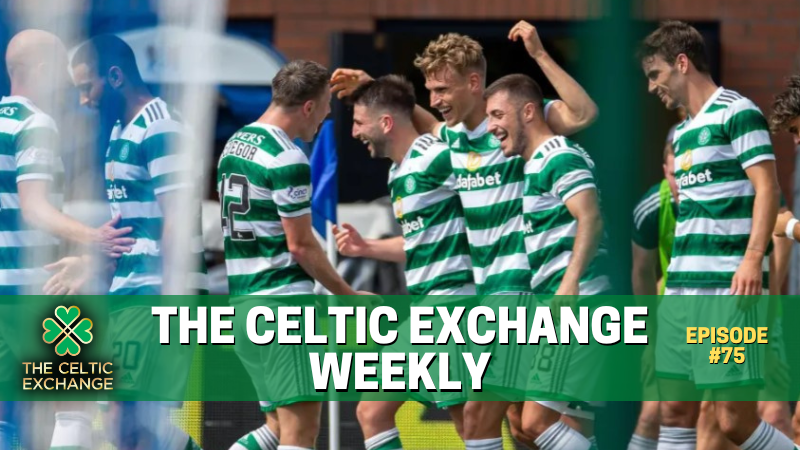