As Celtic’s 2023 gets properly underway we’ll continue to see a number of our players linked with moves away from the club.

Over the weekend Ange confirmed that “no contact” had yet been made regarding any of his squad, but the club are said to be expecting bids now that the January window has officially opened.

Josip Juranovic, Giorgos Giakoumakis and Stephen Welsh seem to be the most notable names in the frame for an exit this month.

There may be others.

The Celtic squad is full of talented players and it can be no surprise that clubs are casting admiring glances in our direction.

As discussed in my most recent article, this isn’t necessarily something we should be concerned about.

As Ange has pointed out, its a bigger issue if you don’t have any players that other clubs would like to have on their books.

BREAKING UP A WINNING SIDE

Players leaving the club doesn’t have to mean things go back to square one.

One major consideration for the player trading model to work will be the readiness of players to step in if someone were to leave.

With the January transfer window now open, I’ve taken a look at how protected we are from any bids that may arrive.

The graphic here shows Celtic’s most played eleven this season in terms of percentage of minutes played.

Looking at this the most used eleven, certain players stand out as having played the majority of the available minutes so far this season.

Matt O’Riley, Greg Taylor, Joe Hart and Cameron Carter-Vickers in particular have been almost ever present.

However, we seem to have healthy rotation going on in all other positions.

Look here at the next eleven based on percentage of minutes played. 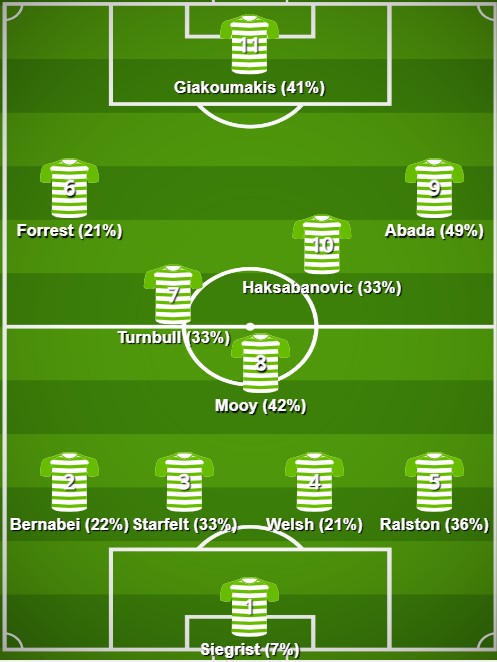 If you exclude the goalkeeping position, where you’d expect a clear number one to play most minutes, then we can start to see a pattern.

We look to have a replacement who’s played something close to a quarter of available minutes this season for every position.

These players should be ready to step in and play regularly.

In fact some – like Carl Starfelt and Callum McGregor – have returned from injury and have now re-established themselves as regular starters.

By the end of the season, I naturally expect both line ups will have changed, especially with the introduction of any new signings.

But I also expect the percentage of minutes played in our second eleven to have grown for most positions.

I think the next phase in the evolution of our squad under Ange will be to have a third tier.

Possibly not for all positions, but certainly for the ones where we have high potential younger players attracting interest.

We’ll likely have 3 players challenging for all positions, though this doesn’t necessarily mean a 33 player first team squad.

Ange Postecoglou appears to be keen on bringing versatile players to the club who can play in more than one position.

We are seeing this versatility in players like Reo Hatate, Aaron Mooy and Sead Hakšabanović’s for example, showing that we a strong level of cover at present across most areas.

Longer term, I think we might see a third pick development player challenging for a first team position.

They will then slowly get exposure to first team football. This has not yet happened this season, though young Rocco Vata looks like he may be chapping the door.

However to date, it looks like a clear squad of 22 players is being utilised for the most part.

The squad has already been strengthened further with the arrival of Tomoki Iwata, Yuki Kubayashi and Alistair Johnston, with others set to follow.

Iwata in particular can perform multiple roles and I’m particularly excited by his signing.

There are also rumoured bids for the K-League players Oh Hyun-kyu (a centre forward) and Kwon Hyeok-kyu (a defensive midfielder).

We’ve also been linked to another central midfielder  in Ardon Jashari from Luzern.

It set to be another busy window of comings and goings.

It’s crucial for Celtic to ensure that when a player leaves we have a suitable (or better!) player ready to take their place.

I expect we’ll continue to see a high level of squad rotation across the remainder of the season and beyond as Ange and his coaching team continue to create the culture and familiarity required to see such a model succeed.

It’s going to be fascinating to watch it all play out.

It’s a remarkably different approach from what we’ve seen in the past, but if we can get it right, we’ll have a talented, valuable and robust squad that should be more than capable of handling any big money bids that the club find too hard to turn down.

How much do you think you remember of Celtic in 2022? Try your luck in our End of Year Quiz and let us know how you score.